‘Hungry To Compete’: Is Ireland The Next New Zealand?

CREATIVITY CHEAT SHEET: The One Show asks local creatives what essentials we need to know about this super creative market

In the first of a series of five country profiles, global advertising and design awards show The One Show is compiling a ‘creativity cheat sheet’. They’ve connected with some of the most impressive creative agencies across the world to provide an invaluable insight into the power-countries that are reshaping the landscape of advertising and design.
With the world’s most impressive advertising and design being entered into the One Show every year, the team that lead the non-profit organisation (The One Club for Creativity) has a keen eye when it comes to what’s hot.
“In the last few years, Ireland has been consistently pulling out the stops with the application of brilliant creative ideas in advertising. We’re seeing work emerging that rivals the likes of markets triple their size globally. With an influx of huge worldwide tech companies taking up headquarters in Dublin, it’s an incredibly interesting market,” says The One Show CEO, Kevin Swanepoel.
Don’t just take their word for it. The One Show has opened up discussions with Irish agencies to get a true insight into the strength Ireland has to offer on a global level. Rothco ECD, Alan Kelly, Chemistry Founder and Creative Director, Mike Garner, Boys and Girls ECD, Rory Hamilton, Target McConnells Senior Creatives, Karl Waters & Monika Crowley, and TBWA\Dublin CEO, Deirdre Waldron talk hunger, excitement and ones to watch.

The One Show> In one line, how would you describe your local market?
Alan Kelly, ECD Rothco: Hungry – Irish brands, Irish marketers and Irish agencies are ready to compete with the best in the world.
Mike Garner, Founder & CD Chemistry: Competitive and demanding, but well served by a number of world-class agencies.
Rory Hamilton, ECD Boys and Girls: Finally stepping out of the shadows.
Karl Waters & Monika Crowley, Senior Creatives Target McConnells: Ever-evolving, always exciting
Deirdre Waldron, CEO TBWA\Dublin: Recovering, competitive and vibrant market, awash with unique opportunities for agencies and clients alike.

The One Show> Why should all eyes be on Ireland right now?
Alan Kelly: Ireland feels like New Zealand did 10 years ago. A small country with buckets of talent and ambition ready to explode.
Mike Garner: The natural resilience of the market. We’ve bounced back from the biggest financial crisis we’ve ever faced, and are looking forward to new opportunities with Brexit.
Rory Hamilton: There’s some really interesting work coming out of Ireland. With so many global companies based here, there’s an opportunity to gain international work.
Karl Waters & Monika Crowley: The Irish market took a bruising for a few years with the global downturn. Having stood firm, we’ve come out the other side much stronger. We’re now ready to make our mark further afield.
Deirdre Waldron: Because we have exceptional creative talent, largely untapped at an international level. We have world-class production opportunities and we’re a centre of excellence for tech companies…. plus imagine WIP meetings in Dublin – great fun!

The One Show> What creative work are you most proud of?
Alan Kelly: This changes on a daily basis. I always love what we are working on right now. Gun to my head … I’d say it’s our recent Christmas campaign for Tesco. But I’ll give you a different answer tomorrow.
Mike Garner: As a body of work, the work we’ve done for Lidl over the past five years, which has helped transform both perceptions of the brand and its commercial success.
Rory Hamilton: The things we had never done before. This year we wrote a kid’s book (‘The Perfect Surprise’ Three & Barnardos) , released a single across 33 countries (‘Bring the Beat’ Digicel), produced some wearable tech to combat bullying in schools.
Karl Waters & Monika Crowley: We recently launched Vodafone’s sponsorship of the Irish rugby team with our ‘Team of Us’ campaign. Our aim, to create the most interconnected fanbase in the world. To do this we’re showing fans the humans behind the super-humans aka the Irish rugby players. After all, you shout louder for people you know. We kicked things off with a documentary following the team on their recent summer tour. We’re only beginning with the campaign too. We’re confident the platform we’ve created will deliver lots more exciting work over the coming four years.
Deirdre Waldron: Health Service Executive, Quit Smoking campaign and Electric Ireland GAA Minors campaign and McDonald’s Power of Taste campaign.

The One Show> Who would you say are the hottest up and coming creatives in your region?
Alan Kelly: Lisa O’Hanlon and Aisling Clarke. They were Rothco interns this time last year and they will be running the agency/the world in 12 months’ time.
Mike Garner: A number of Irish directors are producing amazing work at the moment. For example there’s Lenny Abrahamson whose film ‘Room’ is a complete masterpiece and Paddy Breathnach whose ‘Viva’ – a powerful and moving film about a Havana drag queen – was the first Irish film to be shortlisted for best foreign-language Oscar. Benjamin Cleary’s short film Stutterer also won an Oscar for Best Short Film last year.
Rory Hamilton: We worked with ICAD this year who run a great initiative called “Upstarts” which helps young creatives get a foothold in the industry. This year’s batch were the strongest yet.
Karl Waters & Monika Crowley: There’s always been a tradition of great illustrators coming out of Ireland. That looks set to continue, our one to watch is Lauren O’Neill.
Deirde Waldron: James Goarke & Mikey Ryan (TBWA\Dublin)

The One Show> Apart from your own work, what was your favourite piece of creative work in Ireland over the past year? 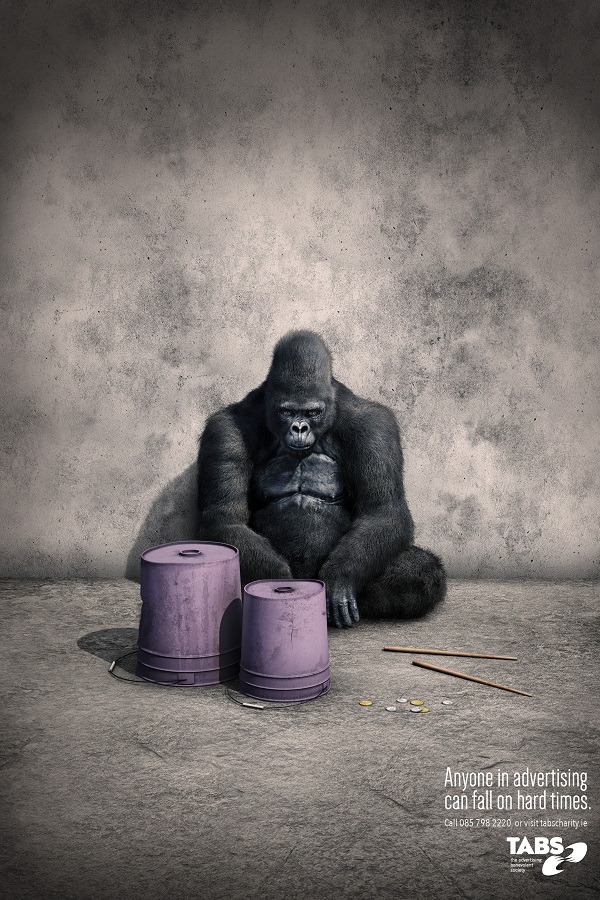 Alan Kelly: The RSA work from Irish International. Their latest spot for drink driving is powerful.
Mike Garner: My favourite ad of last year was ‘Gorilla’ for The Advertising Benevolent Society by Publicis Dublin. A powerful dramatisation of a fact that we tend not to talk about in this business.
Rory Hamilton: The Road Safety Authority seem to keep producing brilliant work through Irish International.
Karl Waters & Monika Crowley: The Irish Cancer Society’s current #IWantToGetCancer is extremely honest, hard-hitting and important work. Everyone involved should be extremely proud.
Deirdre Waldron: Hector Goes Loco for TG4 – Publicis Dublin and Anatomy of a Split Second for Road Safety Authority by Irish International.